By enabling birds to be identified as individuals, ringing provides a way to follow birds, especially migratory species, throughout their life. This is the only way in which we can get information on survival and longevity of birds. Understanding how survival varies in different species and in response to environmental changes is crucial in designing effective conservation policies. Ringing birds with metal rings is a great way of marking birds; metal rings will last out the lifetime of most birds (though some Oystercatchers caught on the Wash are on their third ring!), but generally requires the bird to be re-caught. Marking birds with coloured rings or flags provides a good way of increasing the chances that a bird will be re-encountered since it can be read in the field (especially with a good telescope!). Colour-marks work best on large birds which spend time in areas where people are likely to see them, such as some of the beaches on the Wash coast. WWRG participates in a number of marking projects where these help achieve its scientific goals of monitoring the birds that use the Wash. If you see a colour-marked bird from one of these projects, please report it using the Report a colour marked bird form.

Bar Tailed Godwit
Bar-tailed Godwit are marked with white flags bearing two alphanumeric characters on the left tibia (=upper leg) and a plain scheme marker on the right tibia. Birds caught prior to 2016 have a white scheme marker, birds marked from 2016 onwards have an orange scheme marker. This project started in 2010 and the group has recorded over 1300 sightings allowing precise survival estimates to be made, and it is the only project in the UK to provide such information. The project also provides information regarding the migratory patterns of Bar-tailed Godwit which help confirm previous metal ring recovery data. Bar-Tailed Godwit breed in Northern Siberia and migrate across Northern Europe to a range of wintering locations including the Waddensee (on the Dutch / German coast), the Wash and the coast of West Africa. This is reflected by a range of sighting locations of Wash-flagged birds that includes Russia, Northern Norway, the Netherlands and the Canary Islands.

Curlew
We mark Eurasian Curlew with white flags bearing two alphanumeric characters on the one tibia and a plain scheme marker on the other. Birds caught prior to 2016 have a white scheme marker on the right, birds marked 2016 to 2019 have an orange scheme marker on the right and from 2020 the  green scheme marker is on the left tibia and there is a small green ring below the flag on the right tibia. This project started in 2012 and the group has recorded over 2300 sightings providing information on survival rates on both passage and wintering populations of Curlew. This key data resource supports ongoing work by the RSPB and BTO evaluating population declines in Curlew. Recent work undertaken by the group has shown that male Curlew and short-billed females have a preference for wintering on the Wash, whilst long-billed females move elsewhere in winter. This may reflect the availability of feeding opportunities inland in West Norfolk: the group is especially keen to receive sightings of Curlew in fields during the winter period. Curlew marked on the Wash have been identified as breeding locally within Norfolk on the Brecks, however the majority of birds encountered at breeding locations have been reported from Finland and Sweden. 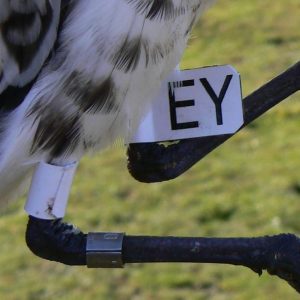 Grey Plover
The group marks Grey Plover with white flags bearing two alphanumeric characters on the left tibia and a plain scheme marker on the right tibia. Birds caught prior to 2016 have a white scheme marker, birds marked 2016 and onwards have an orange scheme marker. This project started in 2010 and the group has recorded over 70 sightings, increasing the number of annual re-encounters of this under-studied plover. The information from birds already marked will provide greater understanding of the average lifespan of Grey Plover and further recruitment into this project will provide sufficient numbers of sightings to provide survival estimates.

Redshank
We started to flag Redshank in south Lincolnshire in late 2019.  They are marked with white flags bearing three alphanumeric characters on the left tibia with a small white ring below the flag and an orange scheme marker on the right tibia.  The objective is to monitor survival of Redshank on the Wash, as we do not recapture enough metal-ringed birds to be able to get precise survival estimates. As a secondary objective, we hope to get a better understanding of how Redshank move through the Wash in autumn, particularly juveniles looking for wintering sites.

Knot
We started to mark Knot with flags on the Wash in autumn 2020 as part of a wider movement study across north-west Europe and Scandinavia. We are using lime flags with three alphanumeric characters on the left tarsus and a plain green ring below the flag. This new scheme will help us to piece together how Knot use the Wash within the context of wider movements. In the wider study, Knot have been colour-marked in several countries including Iceland, Norway, The Netherlands, Ireland and the UK (mainly in north-west England but also, more recently, in Wales, Scotland and the Humber). These schemes will help us to understand the movements of individual birds during spring and autumn migration and between breeding, moulting and wintering sites. Each ringing location uses a specific combination, mainly yellow or orange flags coded with two or three alphanumeric characters although The Netherlands and Humber use a combination of colour-rings and an uncoded flag.

Greenshank
The group marks Greenshank with two colour rings on each tibia in collaboration with wader researchers elsewhere in the UK (particularly in the Solent estuary) to expand our knowledge regarding the distribution of Greenshank; the migratory patterns of these elegant birds are still poorly understood. This project has already provided interesting data: a bird marked by the group in August 2015 has been subsequently encountered in 2016 and 2017 on its breeding grounds at Tromsø in Norway, the most northerly encounter of British-ringed Greenshank to date.

Turnstone
The group marks Turnstone with a black scheme marker ring on the left tibia and two colour rings on the left tarsus (= lower leg) and two colour rings on the right tarsus. The confiding nature of Turnstone mean that these birds can be encountered with binoculars or even the naked eye on sea fronts all around the Norfolk coast (including Hunstanton promenade and Cromer pier). This project has been running for over fifteen years and continues to provide data enhancing our understanding of the average lifespan of Turnstone. Several hundred sightings have allowed ongoing estimates of survival rates in recent years.

Black-tailed Godwit
The group participates in the project that studies the Black-tailed Godwits breeding in Iceland. This project involves researchers from Iceland, Ireland, Britain, France and Portugal and has greatly improved our understanding of how birds migrate (did you know: paired birds winter in different countries), how birds use farmland habitat in the Icelandic breeding grounds and estuaries in winter, and how bird populations respond to environmental change. The project uses up to four colour rings of a range of colours to identify individuals.