A large black and white wader with a bright orange bill and pink legs. Males and females are similar; young birds have duller legs and bill. Oystercatchers are noisy birds and their distinctive kleep call is often heard.

Most Oystercatchers present on The Wash in winter come from Norway and countries bordering the Baltic Sea, where they breed on grass pasture fields. Some birds breed on The Wash and these probably remain all year round. The winter visitors tend to return each winter to the same beach, and often to the same part of the beach.

A small number of pairs breed in The Wash and surrounding area, and can be found throughout the year. Largest numbers are present from October through March. 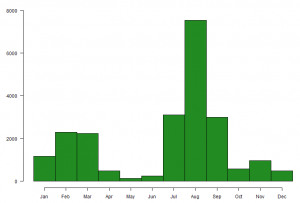 The number of Oystercatchers caught on The Wash, by month, between 1985 and 2016.

Oystercatchers can be seen almost anywhere on The Wash, and at most times of the year. They are most easy to see at high tide when they gather in large roosts at favoured, safe locations, such as the RSPB reserve at Snettisham. As the tide falls off, they move from the roost onto the rapidly exposing mud to feed.

Oystercatchers feed largely on shellfish, particularly on mussels and cockles. Individuals develop specialised feeding habits either hammering through the shell (in which case they have chunky, blunt-ended bills) or by stabbing through the gap between the two halves of the shell (these birds develop a finer pointed bill-tip). In winter, particularly during cold weather, they can often be seen feeding on playing fields and other areas of short grass, feeding on earthworms.

As the graph below shows, the number of Oystercatchers caught each year varies. Some annual fluctuations are related to the success of catching attempts rather than being representative of the number of birds present. 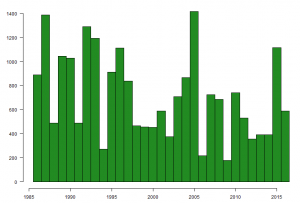 The number of Oystercatchers caught on The Wash, by year, between 1985 and 2016.

This bird also holds the record for the oldest Oystercatcher to be ringed in Britain & Ireland.

The following map shows where Wash-ringed Oystercatchers have been found abroad (blue dots) and where foreign-ringed birds that have been encountered on The Wash were ringed (maroon dots). 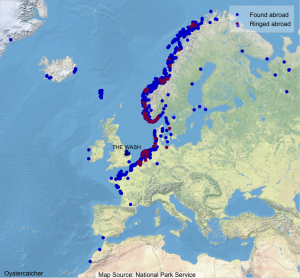 The graph below shows the average weights, by month, of Oystercatchers caught on The Wash between 1985 and 2016. The thick horizontal line gives the average weight and the box indicates the middle 50% of weights. The thin vertical lines indicate the range of observations, with the circles identifying the most extreme values. 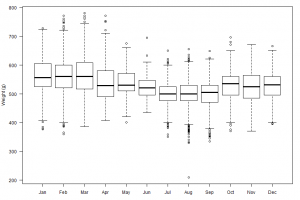