A striking medium sized wader, in flight it can always easily be identified by its diagnostic black ‘armpits’. In winter it is a spangly grey bird, but in summer it has a black belly contrasting with silver grey upperparts.

Grey Plover breed in the high Arctic of Russia and Canada; the first nests weren’t found until early in the last century. Birds breeding in Siberia migrate to The Wash, passing though the Baltic and Waddensea areas on their way.

Grey Plovers are essentially winter visitors, though the first birds back (usually failed breeders) can return as early as late July. 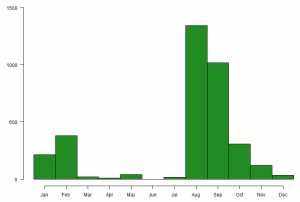 Grey Plovers feed on muddy shores close to the tide edge on all coasts of The Wash. They are easiest to see in the two to three hours either side of high tide. Grey Plovers feed mainly by sight, picking worms, crustaceans (such as sandhoppers) and molluscs off the beach. Remarkably, they also feed frequently at night (when predators are less active) as their large eye is very efficient at gathering light.

As the graph below shows, the number of Grey Plovers caught each year varies. Some annual fluctuations are related to the success of catching attempts rather than being representative of the number of birds present. 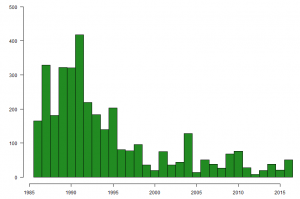 This bird also holds the record for the oldest Grey Plover to be ringed in Britain & Ireland.

The following map shows where Wash-ringed Grey Plovers have been found abroad (blue dots) and where foreign-ringed birds that have been encountered on The Wash were ringed (maroon dots). 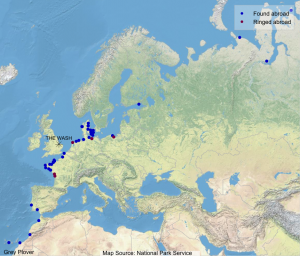 The graph below shows the average weights, by month, of Grey Plover caught on The Wash between 1985 and 2016. The thick horizontal line gives the average weight and the box indicates the middle 50% of weights. The thin vertical lines indicate the range of observations, with the circles identifying the most extreme values. 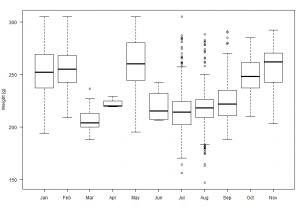 The group marks Grey Plover with white flags bearing two alphanumeric characters on the left tibia and a plain scheme marker on the right tibia. Birds caught prior to 2016 have a white scheme marker, birds marked 2016 and onwards have an orange scheme marker. This project started in 2010 and the group has recorded over 50 sightings, increasing the number of annual re-encounters of this under-studied plover. The information from birds already marked will provide greater understanding of the average lifespan of Grey Plover and further recruitment into this project will provide sufficient numbers of sightings to provide survival estimates.