This was the first field trip of 2018 for the Wash Wader Ringing Group and was the first cannon net catch by the group since September 2017. This was an extremely experienced team, with four cannon net licensees (plus one trainee,) as well as several ringers with considerable experience of both cannon netting and mist netting waders with the group. Sophie and Alyce had each been to one mist net catch previously and only Ellie was completely new to wader ringing with the group (although she had done some wader ringing with another group).

Carole and Cathy undertook a recce of the beaches at Snettisham and Heacham at high tide, arriving on the beach just after first light at 07.15. There were good numbers of Oystercatcher on both beaches, probably numbering around 3,000 in total. The large group on Snettisham beach lifted before Carole could get behind them to determine the size and position of the flock and appeared to head south. The flock on Heacham Beach appeared to be more settled. A sizeable proportion of the main group lifted off, breaking into two groups, one heading north and a second heading south but several hundred birds remained settled, albeit further towards Heacham than the original main group. Small groups of Bar-tailed Godwit were seen flying south. Although no Bar-tailed Godwit were seen amongst the Oystercatcher flocks, a photograph taken by Cathy evidenced that there had been a small number present.

The team assembled at the field house from 17:00, with old friends and new having time for a catch-up on news. Ron had shopped on his way and a meal was prepared, for those who wanted it. After supper, Lucy gave a briefing on the plans for the forthcoming weekend along with a summary of some of the rules regarding both cannon netting and housekeeping during WWRG weekends. The outline plan was to follow the now typical structure of a Wash weekend, with the setting of cannon nets after high tide on Friday evening, taking the catch on Saturday morning, mist netting on Saturday evening high tide and colour-ring resighting on Sunday morning. It was agreed that a catch of Oystercatchers would be attempted on Heacham beach.

Following the briefing, some members of the team sorted the equipment for setting the cannon nets which included loading the cartridges into the cannons and packing the trailer. Four car loads of people then set off for Heacham beach to set three large mesh nets, arriving on the beach at 22:00 to coincide with the falling tide. The track to Heacham along the back of the sea wall is generally rather muddy and a challenge even for 4×4 vehicles. There was some excellent high-level rally driving from the drivers of the four vehicles. The team worked hard to get the nets set well and in as short a time as possible to maximise sleep before an early start on Saturday morning. There is something quite magical about setting cannon nets on a deserted beach in the dark particularly with a bright moon casting light across the Wash.

With a getting-up time of 05:45, there was a chance for a reasonable amount of sleep (in WWRG terms) once the team returned to the base.

Nigel, Lucy and Gerry were based in the hide on the beach with Ron and Ryan as ‘long-stops’ at either end of the beach to talk to any walkers on the beach and ask them politely to avoid the area of the beach with the cannon nets. The rest of the group were stationed at base-camp behind the dunes, catching up on sleep or birdwatching, in anticipation of a catch. Initially the bird situation wasn’t too promising, with much smaller numbers of Oystercatchers than at the recce on the previous morning. The closest birds were in the area that we call nets four and five which, although non-existent, allowed the group at base camp to have some indication of how close the birds were to the actual nets. Oystercatchers can be notoriously difficult to move along the beach (involving a process called ‘twinkling’). However, Nigel and Lucy masterminded an impressive piece of twinkling with Aron gently encouraging the birds (Bar-tailed Godwit and Oystercatcher) into the area in front of net 3. Nigel had no sooner relayed to base camp that, if the 25 Bar-tailed Godwit became 50 they would fire, than 3-2-1-fire came over the radio and the team found themselves hurtling down onto the beach to get to the nets as quickly as possible.

The net had been fired into water on an incoming tide which necessitated an efficient lift of the net onto dry ground, above the expected high-water mark. The birds were carefully extracted and taken off the beach into keeping cages. This is always a high adrenaline period of activity following the catch but, with each individual playing their part, the birds were soon safe in the keeping cages and the equipment lifted off the beach. 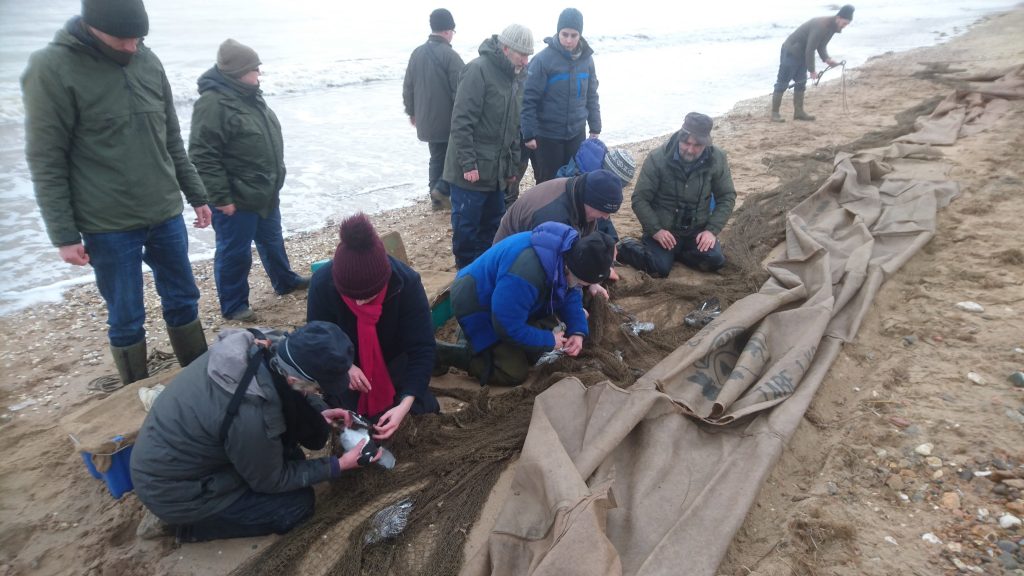 Extracting on the beach, by Rob Robinson

A ringing team and a processing team were sorted with an additional team to put individually marked flags on the Bar-tailed Godwit, which enable these birds to be located on the beach without the need to recapture them. The team was pleased to have caught 40 Bar-tailed Godwit, all of which were flagged. Unfortunately, the predicted rain began to fall part-way through the processing of the Oystercatchers which resulted in an unusual arrangement of in-car processing, with birds being passed in through one of the rear doors and out again through the other, having been fully processed in between the two! This kept both birds and processors dry.

Once the birds had all been released and the trailer re-packed, most of the team returned to the field house to prepare and eat a well-earned breakfast. Rob P and Carole decided to delay their breakfast and make the most of the receding tide to look for colour-ringed birds. This paid off, with a total of 36 sightings, mainly of Curlew but also three (WWRG) Bar-tailed Godwit and three (foreign) Knot.

One of the retrapped juvenile Oystercatchers was a Norwegian-ringed bird.

Top retraps from the catch included the following:

Although the oldest recorded retraps for Oysteractcher and Bar-tailed Godwit are 40 years 1 month 2 days and 33 years 11 months 13 days respectively, these are still good recoveries.

After breakfast, the trailer was unloaded from the cannon net catch and reloaded with equipment for mist netting. Two teams then left with the mist netting equipment for Terrington Marsh where two sets of nets were put up. Aron and Alyce remained out on the marsh to watch the nets whilst the remainder of the team returned for an early tea.

Another briefing ensured that the team were reminded of the safety rules of working on the marsh in the dark before the teams returned to the nets to put the sound lures on two hours before high-tide. The teams were busy at the nets with a continual stream of birds to extract. This was a good catch for January, with 103 birds of nine species; anything over 50 birds is considered to be acceptable. The Lapwing was an unusual surprise, providing an opportunity for people to examine this bird in the hand. This was also another good catch of Black-tailed Godwit. Foreign retraps are always interesting and a Swedish Dunlin from this catch was no exception.

One of the hazards of Wash trips is the propensity for vehicles to get stuck in the mud! This trip was no exception with Nigel’s 4×4 finding itself completely stuck behind the seawall at Terrington. The final task of the night was therefore to muster a team of ringers with enough strength left after a long day in the field to push the vehicle out of its rather sticky situation, not helped by the driver (who shall remain nameless) having the front wheels stuck at an angle of 90 degrees to the direction of travel!

The birds were all processed and released (and the vehicle unstuck from the mud) in time for everyone to get back to the fieldwork house just before midnight. It had been a long day with alarms sounding at 05:45 and bed after midnight. Wash days often feel like two days in one when we have two successful catches.

Sunday provided a welcome late start with alarms set for 08:15 (very unusual on a Wash weekend!) due to a high tide at 10:12. Rob P organised the team into small groups of two to three individuals to look at a variety of sights where birds might roost at high tide, whilst some members of the group remained at the base to undertake a variety of jobs that needed to be done. Rob had interrogated BirdTrack to look at sites where good numbers of Curlew had been reported to widen the area where the group is looking for colour-marked birds. The usual fields and beaches were visited including Heacham and Snettisham whilst a couple of people investigated new areas around Dersingham and Ingoldisthorpe. A total of 26 resightings on Sunday morning brought the weekend total to 62.

Resighting totals for the weekend:

Five individuals from foreign schemes were resighted including a Bar-tailed Godwit from The Netherlands and a Curlew from Finland. Both these birds have been resighted previously by WWRG, the Bar-tailed Godwit last winter and the Curlew in August 2016. There were also three Knot, probably all from Norway.

As ever, there were lots of jobs to be undertaken before people left as we always aim to leave the house clean, tidy and well-maintained at the end of each trip. Thanks to everyone for another successful trip, particularly to Lucy for leading the cannon net catch, and to all who contributed to tasks including shopping, cooking and washing-up.