The weekend began, somewhat unusually, with a mist nesting session on Terrington Marsh. This required a small number of people to arrive at the fieldwork house mid-afternoon to set the nets on the marsh ready for the evening catch. Two lines of nets were set, one on the E-pool and the second on the cannon-netting pool, with Ron and Nigel leading the respective teams.

Nigel and his small team were just leaving the marsh, having set the nets, when a flock of about 35 Ruff passed close by. The group headed straight for the nets and the team were astounded to watch two birds land in the net followed by a further five which looped round and landed in a second net. The team sprinted back to the nets, getting soaked in their excitement and haste, and extracted the seven birds from the nets. With no ringing equipment having been brought out, the birds were taken back to the fieldwork house for ringing and processing. 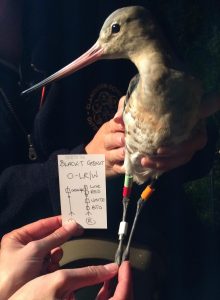 Nigel commented that in 45 years of mist netting on Terrington marsh, he had never experienced birds going into the nets in broad daylight other than an occasional Redshank flushed whilst setting the nets. Only three members of this rather experienced team had ever ringed a Ruff. The birds were all juveniles and the considerable size difference between the five Ruff (males) and two Reeve (females) were noted (with different ring sizes for the two sexes).

Lizzie and Ryan remained on the marsh to watch the nets for any more potential day time catching whilst the remainder of the team returned to the fieldwork house with the birds and for their tea which had been prepared by other members of the team whilst the nets were being set. At 19.00 the team returned to the marsh and tapes were put on. Birds immediately came into the nets (even before the tapes were playing) and both teams were kept busy extracting birds until high tide when the birds were no longer flying around. The birds were all taken back to base camp for ringing and processing; in addition, the godwits and the Greenshank were given colour rings. This was a lovely catch with a good range of species.

Before retiring for the night, Rob P organised teams for colour ring resighting on Saturday morning and departure times were all agreed. The team were all in bed by 1 am.

After a cooked breakfast and a small amount of down time, the teams returned to Terrington Marsh to set the same net lines as on the previous evening in the hope of a second good catch. There were no daytime catches on this occasion and Carole and Ryan remained to watch the nets whilst the rest of the team returned to the fieldwork house for a curry tea. This was a quieter evening initially with few birds coming into the nets. Onlookers would have found a strange sight near the cannon net pool where the team was spread in a circle, heads facing inwards as in some strange ritual! Excellent work was happening, however, with regards to the website. Ruth, who was sorely missed, was present in spirit as Jacquie emailed our ideas for identifying some of the members of the Wash Group on the website! Birds then started to fly into the net and a reasonable catch was made with Grey Plover as a new species for the weekend.

The team headed off to Heacham on Sunday morning with the usual convoy of 4×4 vehicles making the rough journey across the back of Snettisham sea wall and the Heacham dam. Two small mesh nets were set by 07:30 with most of the team in pace at basecamp and Nigel, Emily and Lucy in place with scopes and the firing box. The Sanderling proved to be rather awkward and failed to roost in a useful position as they had done on the previous morning. It took a total of eight twinklers, working simultaneously on the birds to get them into a catchable position. At one point, Nigel asked for an ‘inexperienced’ group member to join the twinklers already on the beach. Before Rob could send Hugo, Sam set off with Skye – a combination of one of the most experienced members along with two-month baby Skye twinkling for the first time. 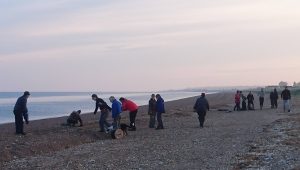 There were a variety of interruptions which affected the birds including a Merlin and a member of the public who chose not to take the sea wall path despite being asked very politely. There was also a kayak (we were reliable informed by Ron that the kayaker was using a traditional eskimo paddle – no-one was entirely sure what this was but we all felt more educated as a result). Comment of the day was probably a request to Ron, who was twinkling to ‘try to move your birds towards the catching area’ to which Ron replied ‘I’m trying’!

The net was fired on approximately 90 birds but the catch was considerably less as the net didn’t go out as far as expected. The net had been quite challenging to set as it was on a ridge on the shingle beach. This had necessitated laying the cannons under the net and the cannons had been angled too low for the net to go out to its full extent.  Nevertheless, a good catch was made and this provided opportunities for newer members of the group to have a go at taking measurements on the birds. 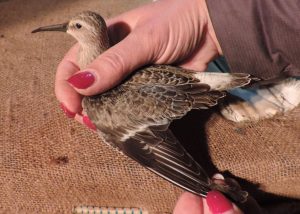 The weekend finished with a small team undertaking a third mist net catch, this time at Gedney. After setting the nets, a fish and chip supper was thoroughly enjoyed by all. A couple of slightly bemused walkers gave us very strange looks as we sat round a table just behind the sea wall eating supper – they probably thought we were a very strange group (which, of course, is completely untrue!).

Gedney isn’t the easiest place to find a way across and there was some concern, in the absence of Aron, that we may lose a few people on the marsh. I am pleased to report that no-one was lost and that everyone thoroughly enjoyed themselves, particularly as there was such a good range of species caught, including a Curlew Sandpiper, a new species for the trip.

All in all, this was a very successful weekend with a total of 321 birds caught and processed. A huge thank you to everyone who participated in the weekend – we couldn’t have done it without you!