A medium sized, grey wader that often forms large flocks, sometimes of more than 100,000 birds, which swirl over The Wash in winter in an astonishing display of aerial acrobatics. Although relatively drab in winter, in the breeding season it has a rich red breast and richly patterned upper parts.

Knot are circumpolar breeders of the  high Arctic. Two populations use The Wash, birds that breed in Siberia (race canutus – green arrows on map) pass through The Wash on their way to wintering areas in Africa, while birds that breed in Greenland (race islandica – orange arrows) spend the winter here. 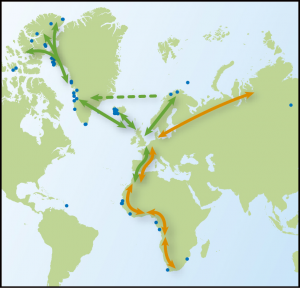 Knot are winter visitors to The Wash, with greatest numbers present in mid-winter (November to January). In cold winters, numbers can be augmented significantly by birds that would normally winter on the Waddensea. 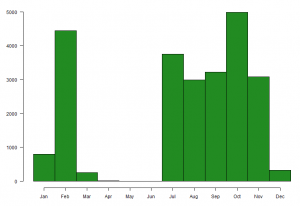 Knot feed on muddy shores close to the tide edge on all coasts of The Wash. They are easiest to see in the two to three hours either side of high tide when they stop feeding and come to roost at a few favoured sites. A visit to Snettisham or Holme on an early morning high tide in December or January will provide an unforgettable spectacle of huge flocks of birds coming into roost. Knot feed by touch on small clams, snails and worms buried just below the mud surface.

As the graph below shows, the number of Knot caught each year varies. Some annual fluctuations are related to the success of catching attempts rather than being representative of the number of birds present. 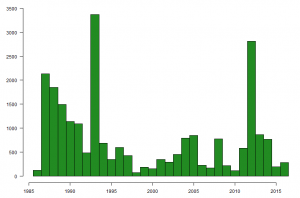 The longevity record for the oldest Knot to be ringed in Britain & Ireland stands at 27 years 3 months 29 days.

The following map shows where Wash-ringed Knot have been found abroad (blue dots) and where foreign-ringed birds that have been encountered on The Wash were ringed (maroon dots). 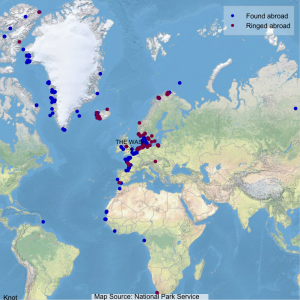 The graph below shows the average weights, by month, of Knot caught on The Wash between 1985 and 2016. The thick horizontal line gives the average weight and the box indicates the middle 50% of weights. The thin vertical lines indicate the range of observations, with the circles identifying the most extreme values. 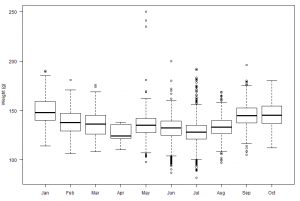 We started to mark Knot with flags on the Wash in autumn 2020 as part of a wider movement study across north-west Europe and Scandinavia. We are using lime flags with three alphanumeric characters on the left tarsus and a plain green ring below the flag. This new scheme will help us to piece together how Knot use the Wash within the context of wider movements. In the wider study, Knot have been colour-marked in several countries including Iceland, Norway, The Netherlands, Ireland and the UK (mainly in north-west England but also, more recently, in Wales, Scotland and the Humber). These schemes will help us to understand the movements of individual birds during spring and autumn migration and between breeding, moulting and wintering sites. Each ringing location uses a specific combination, mainly yellow or orange flags coded with two or three alphanumeric characters although The Netherlands and Humber use a combination of colour-rings and an uncoded flag.