The Turnstone is a small, dumpy wader usually found in the rockier areas of The Wash. They are easily identified by their distinctive black-and-white heads and tortoiseshell backs. In the summer, males have white heads that are flecked black, whereas females have much browner crowns.

Turnstone are high arctic breeders that visit The Wash in winter. Colour-ring sightings show that at least some of our birds come from northern Greenland (green arrows on map). As the map shows, other visitors come from Fennoscandia (orange arrows). 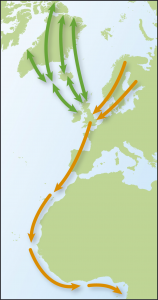 Turnstone are primarily winter visitors to the Wash, and so are commonest in October through March, but at least a few individuals are present in most months of the year. 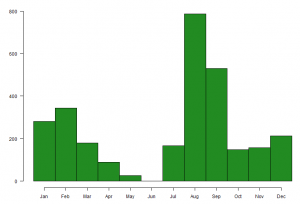 Turnstone prefer rocky habitats, and so are commonest on the eastern shore of The Wash. They can be seen on most of the beaches from Snettisham to Hunstanton, particularly around high tide, when they often roost at the base of the sea-wall. Turnstone mostly forage by turning stones, or picking through wracks of seaweed (giving rise to the local Norfolk name of ‘Tanglepicker’) for small invertebrates. They are, however, notoriously catholic in their choice of food, and a series of articles in the journal British Birds in the 1970s documented them eating everything from bars of soap to human corpses!

As the graph below shows, the number of Turnstone caught each year varies. Some annual fluctuations are related to the success of catching attempts rather than being representative of the number of birds present. 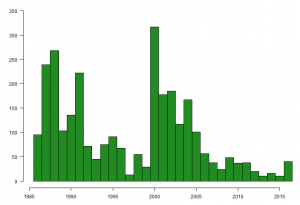 The longevity record for the oldest Turnstone to be ringed in Britain & Ireland stands at 20 years 0 months 3 days.

The following map shows where Wash-ringed Turnstone have been found abroad (blue dots) and where foreign-ringed birds that have been encountered on The Wash were ringed (maroon dots). 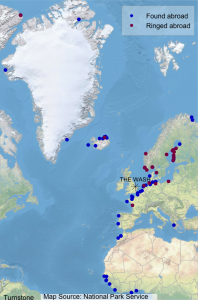 The graph below shows the average weights, by month, of Turnstone caught on The Wash between 1985 and 2016. The thick horizontal line gives the average weight and the box indicates the middle 50% of weights. The thin vertical lines indicate the range of observations, with the circles identifying the most extreme values. 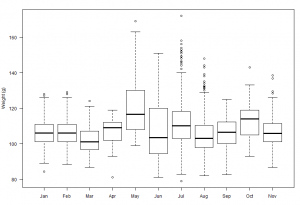 The group marks Turnstone with a black scheme marker ring on the left tibia and two colour rings on the left tarsus (= lower leg) and two colour rings on the right tarsus. The confiding nature of Turnstone mean that these birds can be encountered with binoculars or even the naked eye on sea fronts all around the Norfolk coast (including Hunstanton promenade and Cromer pier). This project has been running for over ten years and continues to provide data enhancing our understanding of the average lifespan of Turnstone and further recruitment into this project will provide sufficient numbers of sightings to provide survival estimates.