The Redshank is perhaps one of the most noticeable birds on the marsh, largely because it is the first to stir at the sight of an intruder, the white wing bars flashing as it flies away noisily. This behaviour has frequently led to it being called “the warden of the marshes”.

Two populations of Redshank use The Wash, those that breed in Iceland (race robusta) and those that breed in Britain and Scandinavia (race totanus). They are a common breeder on the saltmarsh in The Wash; some of these birds will remain year round, to be joined in winter by birds from further north. 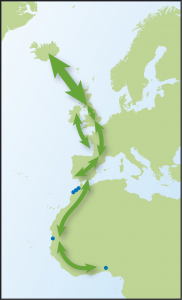 Redshank are common on The Wash throughout the year, although most are caught between August and October. 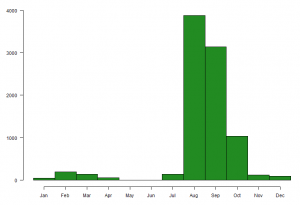 Although they are common throughout The Wash, though they occur less commonly in sandy areas; almost any walk along the shore will be accompanied by the cries of these birds. Redshank use their bill to probe the mud for worms, small clams and snails. They also feed in flooded grass, looking for earthworms and insect larvae, particularly those of craneflies (‘leatherjackets’).

As the graph below shows, the number of Redshank caught each year varies. Some annual fluctuations are related to the success of catching attempts rather than being representative of the number of birds present. 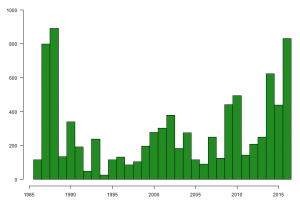 The longevity record for the oldest Redshank to be ringed in Britain & Ireland stands at 20 years, 1 month and 15 days.

The following map shows where Wash-ringed Redshank have been found abroad (blue dots) and where foreign-ringed birds that have been encountered on The Wash were ringed (maroon dots). 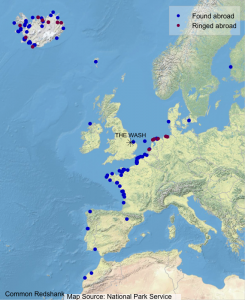 The graph below shows the average weights, by month, of Redshank caught on The Wash between 1985 and 2016. The thick horizontal line gives the average weight and the box indicates the middle 50% of weights. The thin vertical lines indicate the range of observations, with the circles identifying the most extreme values. 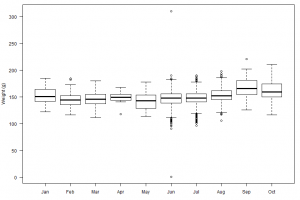 We started to flag Redshank in south Lincolnshire in late 2019.  They are marked with white flags bearing three alphanumeric characters on the left tibia with a small white ring below the flag and an orange scheme marker on the right tibia.  The objective is to monitor survival of Redshank on the Wash, as we do not recapture enough metal-ringed birds to be able to get precise survival estimates. As a secondary objective, we hope to get a better understanding of how Redshank move through the Wash in autumn, particularly juveniles looking for wintering sites.