A small plover with a sandy brown back, white underparts and a distinctive black collar and face markings. It is typically seen running up and down the beach in a characteristic stop-start fashion. It can be surprisingly difficult to see on the beach, particularly in summer when it is nesting.

Ringed Plovers are short-distance migrants. Some birds that breed on The Wash remain year round, but others migrate south-west in the winter to the Channel coasts of England and France. In winter some birds from northern Europe (particularly Scandinavia), migrate to The Wash. 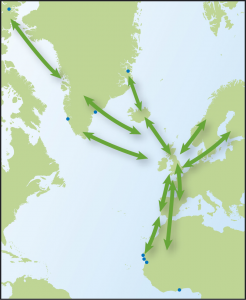 Ringed Plovers are present year round on The Wash. In the breeding season they are thinly spread along the sandy beaches of the eastern Wash and the North Norfolk coast. In winter they are more likely to be seen in flocks. 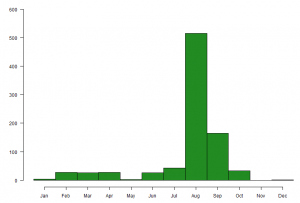 Although Ringed Plovers are reasonably common throughout The Wash, they are commonest on the sandy beaches of the eastern shore and the North Norfolk coast. Ringed Plovers feed mainly by sight, picking small worms, crustaceans (such as sandhoppers) and insects off the beach.

As the graph below shows, the number of Ringed Plovers caught each year varies. Some annual fluctuations are related to the success of catching attempts rather than being representative of the number of birds present. 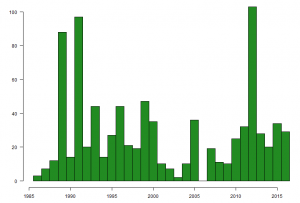 The longevity record for the oldest Ringed Plover to be ringed in Britain & Ireland stands at 21 years, 11 months and 12 days.

The graph below shows the average weights, by month, of Ringed Plover caught on The Wash between 1985 and 2016. The thick horizontal line gives the average weight and the box indicates the middle 50% of weights. The thin vertical lines indicate the range of observations, with the circles identifying the most extreme values. 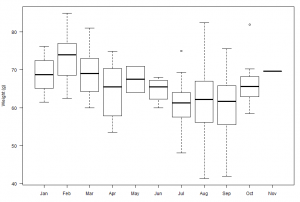