The WWRG Spoonie team members are now on their way back from China. They sent two more updates before they left: 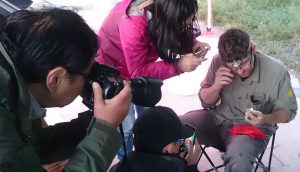 8 October update: We were up again not long after midnight and out on the shore, setting mist nets as the tide ran off. We set two lines of nets and started to catch, largely Red-necked Stint but also a Spoonie and a Relict Gull. Over 70 birds were caught in total and lots of samples were taken for the Centre for Disease Control team. A small team headed back to the hotel to collect more people, breakfast and telescopes while the rest finished processing the birds and headed over to the lagoon, only to discover they had left one team member on the seawall!

We set the cannon net and whoosh net but it was another frustrating day with neither fired so we returned to the hotel for about three and a half hours sleep before setting off again to try mist netting on the lagoon. 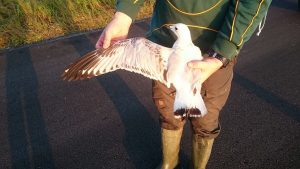 Only about 30 birds were caught but they included a great range of species including Great Knot but, unfortunately, no Spoonies. Back to the hotel for about four hours sleep then off again with a team trying to whoosh net and others out looking for other Spoonie locations and then scanning for resightings. The whoosh netting didn’t work again so we will try on the shore tomorrow while also checking other sites and doing more resighting. Up to 26 Spoonies, including a variety of marked birds, were seen in one sweep of a telescope on the mudflats today.

11 October update: We decided to check three sites today, both for resighting and catching options and we also tried whoosh netting on the mudflats. The scanning was impeded by some photographers but we got some data; however, the morning whoosh netting was completely scuppered when a drone came over. The Stints stayed put but half the Dunlin and all the Spoonies left. We picked up the net on the rising tide and spent high tide birding in bushes between the shore and the lagoons, seeing two species of Paradise Flycatcher and Mugimaki Flycatcher amongst other goodies. 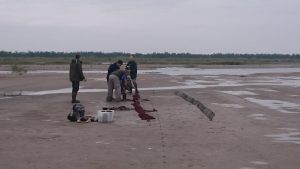 In the afternoon, those scanning managed to get some data but those catching didn’t. Back to the hotel for a quiet night, or not! There are birds to cannon net tomorrow and a small team headed off to mist net on the rising tide at the whoosh netting site. They caught seven, but sadly no Spoonies. Back to the hotel for a few more hours sleep before heading out to try using traps and cannon netting on the fish pond where we were on the first catching attempt, as well as more resightings.

Things finally went well, although there was a major disturbance and a lot of jiggling was needed to get the catch. Unfortunately, the Spoonie in the area departed leaving about 250 birds with a lot of Dunlin for the apocalypse research project*. We made an excellent catch, largely extracted by the students; all birds were away in around three hours with various samples having been taken. The catch included two Moscow-ringed Dunlin including one ringed as a chick!

Back at the hotel we had to sort out lots of muddy gear (the mud was clingy) and then had a final night meal with our hosts before starting our long journey home. We would have liked to have caught more for the various researchers involved in the project and would have especially liked to have caught more Spoonies, but we got an amazing number of sightings and learnt more about how they use the area. A fascinating, tiring and exciting two weeks.

* As these blogs were written on a mobile phone, we are not sure whether this is an auto correct error or whether there really is a project called the ‘apocalypse research project’. I’m sure all will be revealed when the team returns, but in the meantime, if anyone knows, feel free to let us know!