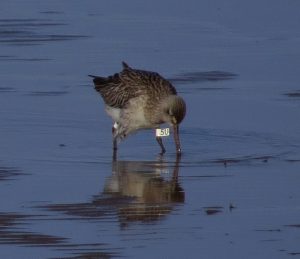 The team assembled at the base house from 17:00 to settle in and to have a meal prior to going out to set the cannon nets on Snettisham Beach. Following a supper of baked potatoes with plum crumble for pudding, members of the team sorted the equipment for setting the nets, including loading the cartridges into the cannons and packing the trailer. Four car loads of people then set off for Snettisham Beach to set three small-mesh nets, arriving on the beach at 21:00 to coincide with the falling tide. The team worked hard to get the nets set well and in as short a time as possible to maximise sleep before an early start on Saturday morning.

Nigel, Ros and Lizzie were based in the hide on the beach with Chris and Dave as ‘long-stops’ at either end of the beach to talk to walkers and politely ask them to avoid the area of the beach with the cannon nets. Carole was dropped off at Heacham to attempt to drive any birds on the beach towards Snettisham. The rest of the group was stationed at base camp just behind the dunes, maintaining a very quiet, low profile to avoid disturbing the birds on the beach. There were approximately 200 Sanderling and 200 Oystercatcher on the beach but, despite every effort of the hide team, and of Chris who was sent to twinkle, a catch was not made. The tide never quite reached the expected point and both groups of birds left the beach. Decoys were set as a final attempt to draw more birds into the area but this was not to be.

A rather disappointed team returned to the base house for breakfast (which never tastes as good without a catch). A few members of the group stayed at Snettisham to look for flags on Curlew in the fields at high tide, and then for Bar-tailed Godwit on the receding tide, which was quite successful (see below for numbers of birds sighted over the weekend).

After breakfast, the trailer was unloaded from the cannon net attempt and repacked with the equipment for mist netting. The team then left with the mist netting equipment for Terrington Marsh where two sets of nets were put up, six nets on the ‘E-pool’ and 11 nets on the ‘cannon-net pool’. A few people remained at the base house to prepare tea. The team setting the E-pool had the opportunity to look at the remains of the whale out on the marsh and the skulls of various creatures that have ended up there due to the use of the whale as a plucking post. Dave and Patricia remained out on the marsh to watch the nets whilst the remainder of the team returned to the base house for an early tea. 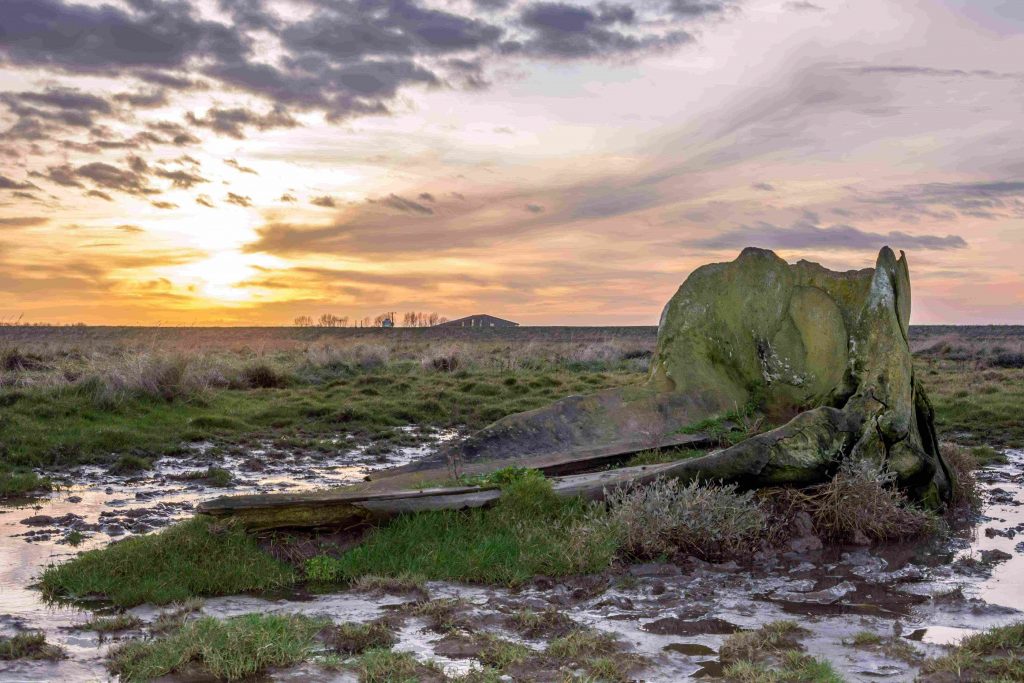 There was a small window for mist netting due to the timing of high tide (2 h 15 m after sunset). Sound lures were on by 18:00, with just an hour and a half between darkness and high tide (the tape lures would usually be on at least two hours before high tide). The teams remained at the nets for the duration of the catch with only one larger wader (Bar-tailed Godwit) brought back for processing ealry. This bird was a retrap but its capture enabled a flag to be put on to enable future resighting.

There was a moment of panic from the team at base camp when, having been asked by Nigel to take Willow for a walk, they were unable to find her. A radio call to Nigel resulted in him almost having a heart attack out on the marsh but the explanation that he had parked his car someway up the road in order to have a quick getaway solved the problem and Willow was duly taken for her walk.

A small catch provided time for newer members of the group to have the opportunity to ring several waders of three species and to learn about ageing these species. All the birds were ringed, processed and successfully released back onto the saltmarsh.

One of the most interesting aspects of any ringing session is looking back in IPMR to determine the original ringing date and location of the retrapped birds.

FA15030 – this Oystercatcher was ringed on 30 July 1988 at Friskney as an age 5 (see Key to Codes for an explanation of age codes) so, at 30 years old, it was older than several members of the group this weekend. Not surprisingly, the ring had worn quite badly and needed replacing with a new one.

Rob P organised the team into small groups of two to three individuals to visit a variety of sites to look for colour-marked birds. The main sites at high-tide include Snettisham Pits RSPB Reserve, where roosting Black-tailed Godwit and Knot can be found, and a selection of fields around Snettisham and Heacham where Curlew can often be found. Once the tide has begun to recede, the focus is on looking for Bar-tailed Godwit that return to the mud flats once exposed. Some members of the group remained at the base house for the morning to undertake a variety of jobs that needed to be done.

Resighting totals for the weekend

This was a fantastic effort in terms of looking for colour-marked birds over the weekend with some data obtained on each of the three morning tides. The group are now up to 155 sightings of 88 individual Bar-tailed Godwit since November 2017 with over 100 individual Curlew sighted over the same time-period. This is a superb effort from members of WWRG both as part of the scheduled weekend field trips and of individual efforts at other times.

Foreign-tagged individuals from the weekend included a Bar-tailed Godwit (NfYY/RP) ringed in The Netherlands and resighted several times on the Wash, including twice this weekend by separate observers, and a Knot ringed in Iceland in May 2017 (Yellow flag ‘78A’ on right tarsus).

A major feature of this field trip was cake! It was Gerry’s birthday on Saturday and we appeared to have about four cakes with which to celebrate the occasion! As ever, there were lots of jobs to be undertaken before people left as we always aim to leave the house clean, tidy and well-maintained at the end of each trip. Thanks to everyone for another successful trip and to all who contributed to the various tasks that made this weekend enjoyable and fun.