The team assembled at the base house from 18:00 to prepare for a full day of fieldwork attempting to re-encounter marked birds on the East shore of the Wash. The preceding week had seen ‘the Beast from the East’ visit the East coast of England. This extremely cold weather front gave Lincolnshire and Norfolk arctic temperatures and the worst snow storms since 1987, which caused widespread disruption. Concerns were raised before the fieldwork session that wader casualties on the Wash could be extensive, and a plan was made to walk the tideline to search for casualties and retrieve any rings. Circlip pliers are a useful item to have in the pocket for such occasions, and the team left prepared the next day.

The team started the morning by visiting Snettisham to view birds being pushed up the beach on the incoming tide. The first marked bird of the day was a Black-tailed Godwit that had been caught by the group and colour marked in a mist netting session at Terrington in November. It became apparent that the window for observation of birds on the incoming tide had been misjudged, however several sightings of flagged Bar-tailed Godwit and Knot were made. The team had already noted some casualties in the tideline on Snettisham beach; Jenny and Lynne continued to follow the tideline to Snettisham Pits looking for flagged godwit and Knot, whilst the rest of the team checked the fields around Snettisham and Heacham for flagged Curlew. The beach was walked from Heacham South car park to Heacham North to assess for tideline casualties, with Heacham North North Beach checked for marked Turnstone. Cathy discovered a recently expired Golden Plover in the tideline, although often seen in fields during autumn fieldwork, sizeable flocks can congregate on the mudflats during winter. 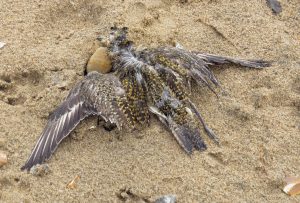 Dead Golden Plover on the tideline, by Cathy Ryden

The team reassembled in the Snettisham RSPB reserve car park for a packed lunch and then moved to Snettisham Beach to observe birds moving back onto the uncovering mudflats with the receding tide. Jenny found the third Oystercatcher casualty of the day, like the other two seen earlier, these birds were aged as 5 (see Key to Codes for an explanation of age codes). On a more positive note, encouraging numbers of Bar-tailed Godwit were seen, with an indication that a proportion of birds had already begun spring migration. Lynne (ably assisted by Saffie) continued the survey of casualties to the start of the dam North of Snettisham Beach. The team retired to the base house at 16:30 having carried out some highly informative fieldwork; the group recorded a comparable number of sightings to a full winter weekend fieldwork session despite being modest in size.  No rings were recovered from the casualties identified during the day’s fieldwork and both circlip pliers were successfully returned to the ringing boxes. The casualties identified indicated that the severe weather had caused more casualties than would be normally encountered, though the mass casualty event feared did not materialise. The following day a Snowy Owl made an appearance at Snettisham Pits (the first for Norfolk since 1991) causing a huge twitch involving over 900 people.

Resighting Totals for the weekend

This was the third fieldwork session that the group have undertaken this winter to look for birds colour marked by the group, and the efforts made by WWRG members to put in the hours of fieldwork necessary to generate such an informative number of records deserves particular praise. We have now marked over 350 individual Curlew since 2012, and over 375 individual Bar-tailed Godwit since 2010. Both species are of global conservation concern, and we have now established a consistent program of fieldwork that allows robust survival estimates for these two species to be generated on a sub-annual basis. This has required consistent resighting effort to at first pass the minimum threshold for generating a survival model of 50 birds and subsequently to approach the 100 individual bird mark indicating an optimally performing study. 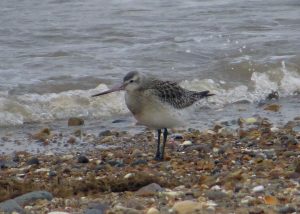 We are the only group in the UK that can provide accurate survival modelling data on Bar-tailed Godwit (and one of only two in Europe) and one of a handful of UK groups that can provide survival data for wintering Curlew. Although we do not re-encounter many Turnstone, this scheme has been running for over a decade and we are understanding more about the longevity of these birds. The Black-tailed Godwit that the group mark and re-encounter belong to one of the best studied wader populations in the world (Icelandic subspecies) and the Wash is the key post breeding migratory site for this population. Although recording marked birds is not perhaps as dramatic as cannon-net catching or as enigmatic as night time mist netting, the data obtained is exceedingly valuable. We are tantalizingly close to our 1000th flagged Curlew sighting since 2012; this data would just not be possible to obtain with metal ring recapture data. The number of ‘control’ sightings of marked birds (always of interest) is respectable and highlights the Group’s work internationally. We are continuing to improve our abilities to record marked birds in the field; if anyone has suggestions for potential new locations to find Curlew feeding in fields, or how to effectively record colour-marked Knot, please share with the Group (if we were as successful at reading Knot rings as Curlew flags, we should see 400 individuals each winter, rather than eight this winter….).

Our challenges ahead are to keep up the consistent level of effort (and managing the increasing amount of data!). Special thanks should be made to everyone for their hard work in recording our marked birds, particularly those attending the observation weekends.