The trip started early for Cathy and Tim who met the plumber who had come on Wednesday to improve the flushing rate of loos – it seems to have worked well. Cathy then took the opportunity to do the shopping for the weekend and started cleaning on Thursday, with more cleaning on Friday (it now looks like we have a new oven).

Cathy did the recce on Friday morning, going to Snettisham and Heacham and checking the inland fields. Unfortunately, although she saw birds she was unable to find a catching option. So there was another round of recces on Friday evening to try and work out which beaches/fields birds were using. Lizzie and Ryan were directed straight to a recce from the M25, with Cathy and Rob P also heading out to beaches. There was little at Heacham NN, but at Heacham there were 400 Oystercatchers, 60 Bar-tailed Godwit and 20 Dunlin. At Snettisham, the only birds were 60 Dunlin in front of the dam. Rob then went to the Pits to check if anything was going in and found about 1,200 Dunlin around on the shore or in the Pits, with 550 Black-tailed Godwit, a few 100 Oystercatchers, 100 Avocet, 30 Knot and 70 Redshank in the Pits. In addition, there were 2−300 Curlew, 500 Oystercatchers, 3−400 Knot on the mudflats.

All the team went out on recces:

Holme – Lucy & Jenny – 200 Oystercatcher (one engraved Darvic, but couldn’t read it), 40 Curlew, 50 Bar-tailed Godwit on second spit out, but some left as they were walking out and went NE towards Titchwell.

Heacham – Phil – 2,000 Oystercatchers at about 2.5 hrs before high tide, which were disturbed by people and eventually all left, although 75 returned later.

Ken Hill – Rob P – no waders using the fields, although there were some fields available.

Snettisham – Lizzie & Guy – no birds found, but there were some fields available.

Royal Estate – Nigel & Ryan – many Greylag Geese, but most of area not harvested and only one field grazed.

Terrington – Ongar Hill to past White Barn – Cathy & Jacquie – approx 250 Curlew on the marsh, some going down in traditional place beyond White Barn at next corner, 1 Greenshank, 3 Golden Plover on field next to path out from car park, which was the only one that has been worked.

Although summering Oystercatchers are not a high priority, they provided the only catching opportunity. We decided to set for them in the afternoon for the evening tide, with two nets on the bottom of the beach to catch as the mud covers and the birds come onto the beach – about 18:00 hrs – well before high tide. The fallback was Sunday morning, but we noted that that would require a very early start. We packed up, cooked breakfast and dinner (with the menu rapidly adjusted to be suitable as a picnic) and headed out. The four-wheel vehicles with equipment drove along to Heacham, with the other cars being left at the usual place behind the sea wall at Snettisham. Two full, large mesh nets were set to cover the bottom of the beach as planned, with a trench for the nets and some very decorative grotting with Ulva (sea lettuce).

There were three sets of people watching the nets (and looking out for people, as well as the long stops), so the newly-endorsed Lucy and the two cannon-net trainees, Ros and Ryan, all got into positions where they could see the catch. We were a bit slow eating dinner – the heat was slowing everyone down, so had to scramble a bit to get into position. As we were doing so, a microlight flew towards the Oystercatcher flock which had gathered on the mud and put them all off. Fortunately, birds came back (or others arrived) and started to walk up into the catching area. Lucy waited until the first bird was getting towards the net and took a catch of 101 Oystercatchers in one net at 18:00 hrs (as predicted!). Only the edge of the net was wet, so there was a rapid cover and straightforward extraction. 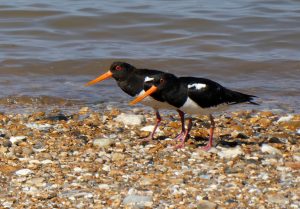 Oystercatchers at Snettisham, by Cathy Ryden

Keeping cages were put up on the beach as there was little breeze inland of the sea wall, but it was still rather warm at the top of the beach, so we put only 2−3 birds per compartment and used shade cloth over a line of cannons on the sunny side of the cages. Ringing and processing started only half an hour after the catch and all birds were away within 1.5 hours. Among the birds that already carried rings, there were two from Stavanger (Norway), one of which also carried a green colour ring with a white inscription (T143) on a tall green ring; the rest had been ringed by us. Back to base for a well-earned dessert and a few celebratory drinks before bed. Plans for Sunday included resighting as well as data checking and work on equipment.

Two of the retraps had first been ringed more than 20 years ago:

A very early start for Rob P and Ryan who got up at 04:10 hrs to go resighting at Snettisham beach. They arrived on site at 05:20 hrs, resighting started at 05:40 and half an hour later they had 22 sightings of 20 individuals (nine Bar-tailed Godwit and 11 Curlew). There were about 70 Curlew, 120 Bar-tailed Godwit and 80 Knot on the beach. They were back at base and asleep again before some of the team got up! Richard, Phil, Nigel and Lizzie had a more leisurely start, leaving at 07:30 hrs for the Pits at Snettisham, where they got five resightings.

The rest of the team dealt with the data and gear from Saturday, as well as strimming the grass by the road to make it safer to pull out and working on equipment – we now have lots of wads, blocks on all the callipers, strung all the new bird bags, mended big sheets of covering material and created a prototype top for the new, more robust, keeping boxes that had been obtained.

After second breakfast and house cleaning and tidying, we headed home.