So our second week started with brunch at 11:00 hrs after a few hours sleep following our first overnight mist-netting session. We headed out to recce/scan the new waterpark (under development) and the rice paddies at Taoizini to look for both mist-netting options for that night on the paddy fields and future canon-netting options on the water park. We set nets on two rice paddies again and had another amazing night with with 299 birds caught including six Spoon-billed Sandpipers (SBS) – amazing. Back to the hotel and bed at dawn this time – strange, we are becoming largely nocturnal, but are also up during the day… 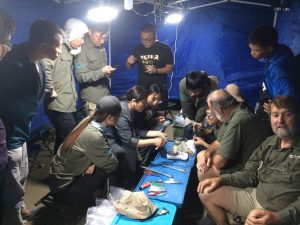 Processing waders and training the Chinese team, by Guy Anderson

We were up late again on Wednesday for brunch in the noodle shop before a very similar day, this time with 253 birds caught including four SBS. This time though, there was an ‘assault course’ between the two sets of paddies we were working on, so we spent much of the night hiking backwards and forwards between them across ridged mud with a slippy surface and negotiating a wide ditch and a concrete ditch each time. The tide has moved on of course, so bed after dawn.

After our now customary brunch we reccied Taiozini for a cannon-net catch and counted 1,028 Nordman’s Greenshank! Off out at 23:30 hrs to set nets at Taiozini waterpark for a very limited mist-netting session (four nets in one line) to catch larger birds for tagging using Chinese GPS/GSM tags. We were hoping to glue mount tags, but many birds were still in body moult. Bed after dawn again, then off to cannon net at Taiozini waterpark, with no success. We were targeting larger waders again, and particularly Nordman’s Greenshank, but the the birds seemed wary of both the hide and the net. Picking up the pop-up hide and walking further away with it helped and we got birds coming from behind the net along the side of the catching area, but only a very small number ever went in front, so we gave up as the tide fell and the birds headed back out to the mud flats. 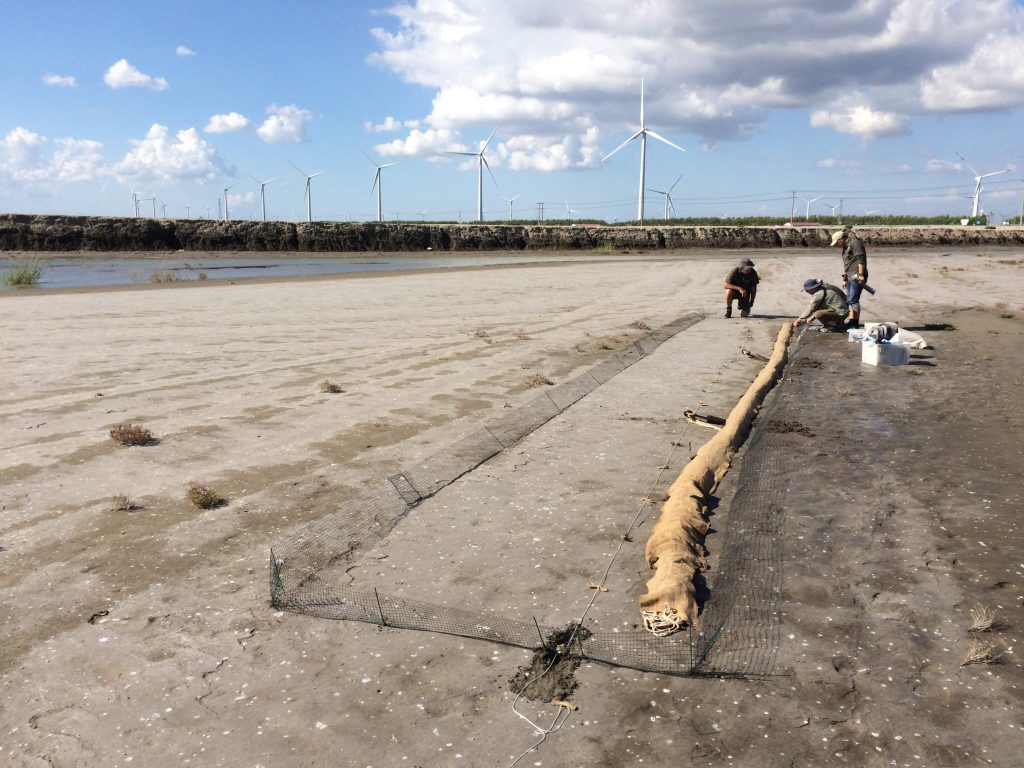 Cannon net being set on a shrimp pond, by Guy Anderson

With no mist-netting on Friday night, we went out scanning at 04:45 hrs, with afternoon scanning after a rest and then early-morning mist-netting back at Fengli. With two lines of nets (nine in total) we caught 141 waders including two Nordman’s and two Far Eastern Curlew and were able to deploy GPS/GSM tags on five Grey Plover, one Oystercatcher and one Far Eastern Curlew. Dawn broke while we were still processing – it’s really odd as you start to find the natural light fading the electric light and colours slowly change. After that it was breakfast before bed and then a ‘night’ until 14:00 hrs when we set out for our last fieldwork, scanning at Donglin, with good numbers of SBS seen and some flags read. Back at the hotel, we had a celebratory meal with much rice wine (53% proof) and malt whisky drunk by the team.

Monday was a day of packing up and trying not to take too much silt home with us… didn’t succeed with that one … as well as a meeting with local officials about the conservation value of the roost sites we have found and been working on this trip, before heading back to Shanghai and dropping two of our number at Chongmin Dongtan – an large island reserve nearer to Shanghai.

This trip has been more successful that we could have imagined, with over 1,900 waders caught of over 30 species (where else could you do that?), including 15 SBS, which are a significant addition to the number of individuals marked away from the breeding grounds, as well as providing size, condition and moult data. We also scanned over 1,000 sets of Spoonie legs (the same birds multiple times, not 1,000 individual Spoonies!) for flags to get population estimates, learnt a lot more about how birds use the area and enjoyed knowledge and cultural exchange with our hosts from Nanjing Normal University and other organisations. The wide range of species caught provided much more condition and moult data, some for very poorly-known species and, as they were all flagged with site markers, will provide more connectivity information in future. The GPS/GSM-tagged birds will also add massively to the knowledge of bird movements on this flyway. So an extremely valuable trip with much learnt but, as always, leaving us with many more questions to answer – roll on next time!