This was a second weekend for the group with no opportunity for making a cannon net catch. However, there was a double opportunity for mist netting, along with the usual colour ring resighting on one tide. The mist netting sessions were initially planned for the high tides on both Saturday morning and Saturday evening but, as with all WWRG field trips, this was dependent on the weather.

The team comprised the usual enthusiastic mix of experienced members, less experienced people and those experiencing their first ever Wash trip. Most of the group live fairly locally to the Wash but people sometimes travel long distances to take part in fieldwork. On this trip we were joined by Liam who had travelled all the way from Cornwall, combining a visit to the BTO in Thetford with the opportunity to join the group for the experience of catching waders.

The team met on Friday evening for a meal and briefing on the plans for the weekend. The weather forecast for Saturday morning suggested that there would be some wind, just on the cusp of manageable for mist netting, but with the additional problem of strong gusts. It was therefore decided not to mist net on this tide and to spend the morning tide looking for colour ringed birds instead. The team was split into small groups, covering the usual spots where it is possible to find colour-ringed birds along the coast on the East side of the Wash.

The groups were up at a reasonable time and headed off to their respective areas to look for colour-ringed birds. The sites included a couple of inland fields where it was thought that Curlew may be found. Small groups of Curlew were located on these fields, some of which had marked flags. 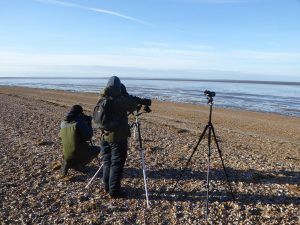 A good number of colour-ringed birds were found of three species – Curlew, Turnstone and Bar-tailed Godwit. Totals numbers of birds are shown below. It was great to get so many sightings of marked Bar-tailed Godwits.

Sophie found a dead Black-headed Gull on the beach which was found to be carrying a Norwegian ring. Whilst gulls are not included in our target species, a foreign-ring sighting is always of interest. Sophie contacted the Norwegian Ringing Scheme to determine the history of this bird. A prompt reply from Norway identified the gull as one which had been ringed as a pullus on 16 June 1996 in Froylandsvatnet, Norway. Given that the average age of a Black-headed Gull is 11 years, this bird had done well to reach 21 years, but was a long way off the longevity record for this species of 32 years 4 months and 9 days!

Re-sighting totals over the weekend:

Following a cooked breakfast, the team split into two groups and headed off to Terrington Marsh to set two net sets, one on the E-pool (with nine nets) and the second on the cannon net pool (with 11 nets). Two people remained on the marsh to watch the nets whilst the remainder of the team returned to the fieldwork house for a very quick tea before setting off back to the marsh to put the sound lures on ready for catching. 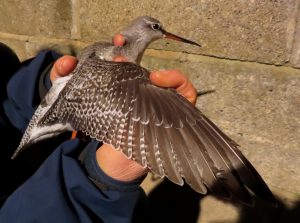 The cannon net pool began to catch immediately, with 40 birds being caught before the lures had been switched on (although the lures were already playing on the E-pool by this time). The cannon net pool proved to be much more successful than the E-pool in terms of numbers although the bird of the evening (Spotted Redshank) was caught on the latter.

After checking weather forecasts, it had been decided that a second mist net catch would be attempted on the next tide on Sunday morning, just using the cannon net site. The nets were taken in at the end of the catch but poles, guys and pegs on the cannon net pool were left in situ for a speedy net set on the following morning.

The early tide enabled the team to be back at the fieldwork house by 9 pm with everyone in bed by 10 pm, ready for a very early start on Sunday. And we had pudding!!! 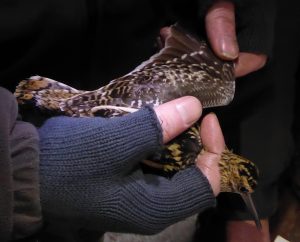 Snipe in the hand, by Jenny Spencer-Jones

An efficient net set was helped by the poles having been left in situ. The lures for the morning catch were on three and a half hours before high tide. Three Black-tailed Godwits had already gone into the nets even before the lure was switched on and several birds flew into the nets as we were extracting the first birds.

This catch was extraordinary in terms of the numbers of Black-tailed Godwit caught – the largest mist net catch of the species by WWRG ever. Unfortunately, due to the unexpected size of the catch, we were only able to colour ring a small selection of these birds.

A well-earned breakfast was enjoyed following the successful ringing and processing of the birds.

The group made two mist net catches in just over twelve hours. This involved a leap of faith on the part of the group leaders in attempting the more unusual task of a morning mist net catch and commitment from all members of the group. The catch enabled newer participants to experience a range of species in the hand whilst the more unusual species including Snipe and Spotted Redshank provided challenges on ageing for even the most experienced members of the group.

Thank you to Emily for being our Team Leader for the weekend and to Mark and Jen for sharing their extensive experience of waders with the group. Huge thanks also to Cathy for masterminding the catering for the weekend.