The Wash is one of a small number of sites of international importance in the UK for the Eurasian Curlew population (the only UK site that supports greater numbers being Morecambe Bay), with peak counts exceeding 8,500 during autumn passage. The Wash Wader Ringing Group has undertaken ringing studies of this charismatic wader for over 50 years and has contributed considerably to our understanding of the UK Curlew population. Metal ring recoveries of birds marked by the group indicate that most birds using the Wash breed in Finland and Sweden, with a smaller proportion coming from breeding sites within the UK. 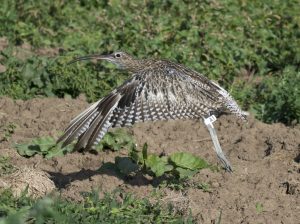 Curlew A1 taking off, by Ruth Walker

Birds depart the Wash for their breeding grounds in mid- to late-March, returning in mid-July. For most, their journey back crosses the North Sea over the German Waddensee, Helgoland, and Jutland (Denmark), then southern Sweden and the Baltic Sea, before arriving in Finland. It is unclear how many stop-overs Wash Curlew use during migration, or whether different birds adopt variable strategies to arrive at their destination, although a direct migration from the Wash to the breeding grounds is certainly feasible based on previous studies of Curlew using telemetric devices.

The data provided from our ringing studies show that Curlew spend a surprisingly little time on their breeding grounds compared to their wintering grounds, in keeping with most other wader species. This might be inferred from the evolution of the characteristic long curved bill of the Curlew, ideally suited to probing deep into tidal mudflats. Migration to Finland allows exploitation of seasonal food abundance for themselves and their chicks, who are precocious and largely independent from their parents on hatching.

From our studies of marked birds, we know that some birds encountered on the Wash during autumn passage are local breeders from the Brecks. There has been a serious decline in the UK breeding Curlew population, which has declined dramatically over the past 20 years. Recruitment of new birds into the adult population has been identified as a key driver for this decline, and conservations efforts such as prevention of chick predation are key priorities.

We are currently trying to understand better the survival rates of the overall, passage and wintering Curlew populations, by applying engraved flags to the Curlew we catch on the Wash. We know that year-on-year survival of Curlew is high, with at least 83% of marked birds seen wintering on the Wash in 2016/2017 surviving to the following year. This is in line with other studied populations of large waders, which demonstrate a high inter-year survival rate. By recording the frequency of marked to unmarked birds in flocks encountered on the Wash, it is possible to also estimate population sizes of birds within defined areas. This provides an additional measure of population size to established surveys such as WeBS counts and helps us to better understand how individuals are using the estuary and surrounding fields. 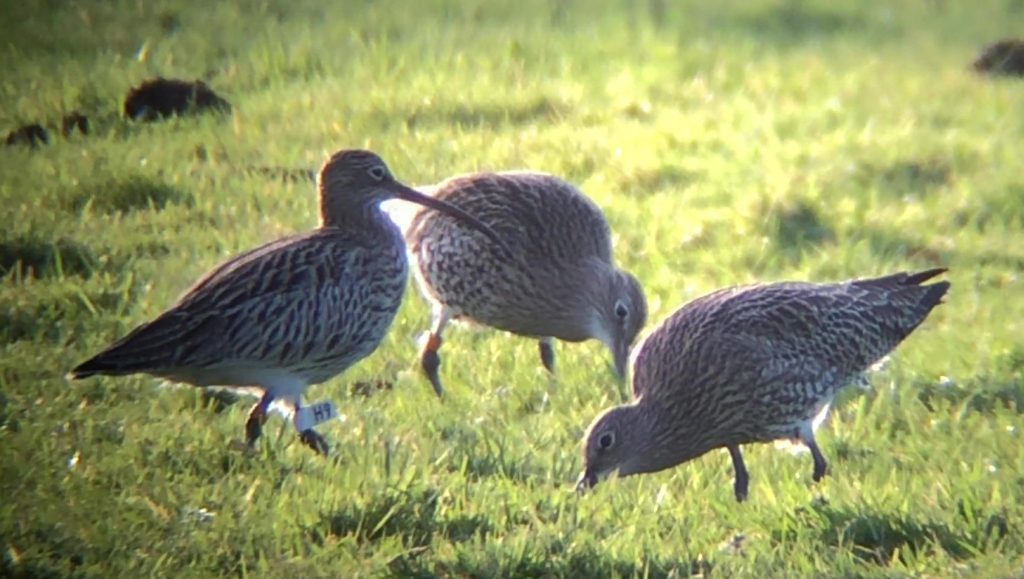 Our data indicate that around half of the birds we encounter on autumn passage will remain in the area over winter, with the remainder moving elsewhere in the British Isles. Birds marked by the group encountered on the Wash in autumn have been seen wintering in Cornwall and Kent, and the group has also recorded birds on passage marked by ringing groups in the northeast and north Wales. These findings confirm that the Wash functions rather like a large transit hub for migrant Curlew as well as a wintering destination (imagine the Wash as being the wader equivalent of Heathrow Airport!).

Our studies have also indicated that wintering birds change their feeding habits, possibly in response to food availability; during autumn passage and early winter, birds can often be encountered feeding on the extensive tidal mudflats on the eastern shore of the Wash. Later in winter, birds are more frequently encountered feeding in fields around Snettisham, Heacham and Hunstanton, with individuals venturing further along the north Norfolk coast. Long-term monitoring strategies such as those carried out by the group are important as they can identify local change affecting survival of wintering birds. For example, extensive change in land use locally could have a profound affect on the wintering Curlew population given their dependence on inland feeding opportunities.

The Curlew data collected by the group extends back over 50 years and techniques pioneered by the Wash Wader Ringing Group have become standard fieldwork approaches used all over the world, contributing to the conservation of many other threatened species of Curlew. This long-term data collection is carried out entirely by volunteers, with several hundred hours of fieldwork involving Curlew undertaken in the past year alone. Our group membership demonstrates a healthy mixture of professional and amateur ornithologists. The work on Curlew carried out by the group is a key resource to provide a comprehensive conservation strategy for one of our most loved and threatened wader species.