Since the early days of WWRG group members have headed out across the world to help on wader projects elsewhere. This year is no exception and this month group members are part of a team working in Jiangsu on the Yellow Sea in China. The team, working with Nanjing Normal University, is aiming to catch and mark Spoon-billed Sandpipers (SBS) to find out more about where this endangered and charismatic species goes, as well as being able to work out population size. We are also aiming to catch a range of other shorebird species, both to assist local studies and to help train other members of the team. 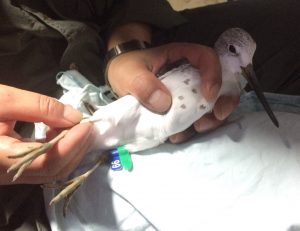 The first week has been absolutely hectic. When we get here each year we have to first find out how things have changed. With very rapid development we don’t know quite what to expect and where we will find the birds, so on our first day we worked in three groups, checking out the study sites, and were pleased to find many birds. With good weather and birds in a site at Fengli where we could mist net, we decided to try and catch there. Our first night (Thursday) was very successful with 165 birds of 21(!) species caught, but unfortunately no SBS. With such a good catch we decided to mist net in the same area the next night and we caught 269 birds, but still no SBS.

We decided to do more reccies on the Friday, as well as scanning for marked/unmarked birds, and trying out the walk-through traps. As it is so difficult to catch SBS we have multiple catching methods to allow us to make the most of any opportunity. We set one of each type at Fengli and got proof of concept with a Kentish Plover caught in one and did more development on the other to get it firing smoothly.

Recceing at the best mist-netting site, by Guy Anderson

Having found SBS on lagoons at Donling we decided to try to catch there on Sunday, with a cannon net on one lagoon and both a whoosh net and walk-through traps on the next one. It always takes longer with a boat involved and we were scurrying to get into position as the birds arrived. We very quickly had a SBS in the sweet spot (very middle of catching area in cannon net) but it was already marked. While it would have been great to check the moult progression and weight of this bird, a primary aim is to get more birds colour flagged as we have so much to learn about their movements and population size, so we waited… We soon got an option on another SBS in the sweet spot and pressed the button but nothing happened. After various discussions about range, batteries and line of sight we realised that the firing mechanism at the net (remote control) was not switched on. A careful foray from a hide on the lagoon fixed that, leaving birds on the lagoon. They soon came back in front of the net and we tried again – and again had no result. Okay, so we next tried line of sight, carefully twinkled the flock gently round and a SBS moved into the sweet spot and we finally made s catch. We were very pleased to catch one SBS in a brilliant mixed catch of 378 birds. It is now marked with JU. 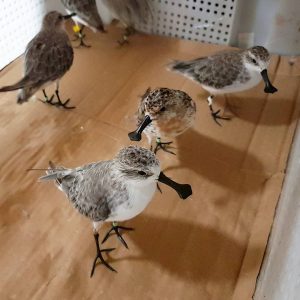 Four spoonies in a box, by Kane Brides / WWT

On Monday we headed to Taiozini to scan, try out the walk-through traps again and to recce for other SBS catching sites. Birds were seen going into both the new recreational park, which is under development, and onto some rice paddies. Once the tide came in we went to look exactly where the birds were and do more scanning. Some rice paddies weren’t planted and the birds were taking full advantage of that. With impressive numbers of SBS on the paddies, we decided to mist net there that night. Setting nets in the dark on bumpy and slippery surface was ‘interesting’ but we got three lines up (one an I shape or H depending on your point of view) and checked them regularly while waiting for the tide to bring the birds over. The first two birds out of the nets were Temminck’s Stints – surely a good omen. We were soon busy and caught a total of 324 birds amazingly including FOUR SBS, one of which was ringed last autumn. Once the nets were down and we had packed up we headed back to the hotel getting into bed not long before dawn – what a first week!