Every May for the last 22 years, members of WWRG have headed off to Delaware Bay to help catch and resight shorebirds as part of an international project studying migrants on stopover. The shorebirds feed on Horseshoe Crab eggs and fatten up rapidly for their journey to the Arctic to breed. We help to catch birds to mark them, check their condition and weight gain, resight marked birds on the beaches to work out survival and return rates, as well as working out how long individuals stay. More information about the project and results can be found here.

We normally fly to Philadelphia and travel down to the study site by car, but this year the flights were expensive and we flew to Newark – a longer drive, but that wasn’t the problem – the plane couldn’t dock initially, then we were sent to a different part of the airport where we had a two-hour wait in immigration. Sadly that meant that by the time we got our hire cars a humongous thunderstorm had come in and it lasted through our whole 3.5 hr journey (it shouldn’t have been that long). A very tired team arrived and ate before rapidly heading for bed. 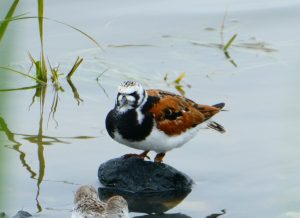 Ruddy Turnstone standing on a rock, by Cathy Ryden

We were still up early the next day (thanks jetlag) and found a catching option. With rain forecast for most of the next week, we decided to try for it and went to Mispillion Harbor to set up our net. We wanted to get samples of our main study species, Knot and Turnstone, it proved difficult to get many Knot, but we made a great catch of 155 birds including 83 Turnstone. All birds were weighed and measured and study species had flags added as well to allow us to resight then in the field. This year, as usual, we have other research projects we are assisting – on this catch samples were taken from Turnstone to find out what microbes they are carrying and we flagged all the Semipalmated Sandpipers for a resighting/condition project. Some of the birds were heavier than we might expect for the time of year, but there were also some very thin birds that had recently arrived from the south.

The morning catch was followed by everyone heading out in the field both to count and resight birds on the sites we cover up and down the Delaware side of Delaware Bay. The next day was more surveying. Initially the weather was fine and sunny, but the forecast rain came in in the afternoon so everyone was a bit soggy by the time we got back to the house for dinner. The crew in the late boat coming in from resighting in Mispillion Harbor were surprised to see a Peregrine hanging out on one of the posts by the DuPont Nature Center – just sitting there looking chilled – we were to see more of that bird…

Having caught only a few Red Knot on Sunday, we tried for another catch so that we could check their weights on Monday. The boat going out reported that the Peregrine was still hanging out on the post – unfortunately it didn’t hang out for long, but spent a lot of the morning chasing the shorebirds. Fortunately we were able to make a catch which included a sample of Knot. There were individual Knot that weighed under 100 g but also several over 150 g – good for the time of year. Still no Sanderling caught, but we have seen very few so far.

We will now be surveying and resighting for the next two days – we get round all of our study sites both to count and check for flags so that we have a good picture of how birds are using the shore and how they move around. The weather forecast for the next few days is not looking good, though…