Tuesday 29 May was a hard day at the office! Off into Mispillion Harbor bright and early again to get another Red Knot sample (and hopefully others too), in the knowledge that thousands of birds went out of Mispillion last night. The late boat crew the previous night had an amazing time with noisy flocks ‘discussing’ migration before heading off high to the north – great to see them go, but sad for us as the season is drawing to a close. There were still thousands of birds left in the Harbor so we set on Back Beach, but the birds didn’t want to play, although we got very close to taking a catch. Plan A, Plan B and Plan C (two moves of the set net) failed to quite get us enough target species (and included too many others), although we did get very close to firing. As the tide dropped off, we gave up after four hours of tension. Back to the houses for lunch, leaving a team of resighters on the beach. Then a try for Sanderling on Prime Hook Beach – this time to the south, again we came very close, but didn’t catch. 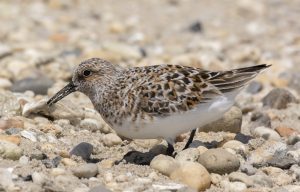 On Wednesday an early boat went to Mispillion again to resight and the rest of the team settled in to inputting, checking and feather washing. In the afternoon a team went out to try to catch Sanderling on Prime Hook Beach. It was again hard to catch, with gulls in front of the net scaring the shorebirds away and Sanderling running up the beach much higher than where we had the net set but, after some epic twinkling, we made a small catch  All Sanderling were poo- and blood-sampled for hormones before being processed and sent on their way. The weights of the Sanderling varied from 54 g to 102 g and there were three first years which were doing a partial moult of the outer primary, presumably to replace poor feathers. The boat team came back not long after the fire, having had a lovely evening with birds migrating again. All birds away and back to the big house for pizza from Grotto Pizza. 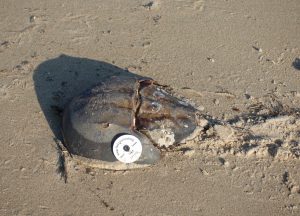 Some Horseshoe Crabs are also monitored and tagged in Delaware Bay. Photo by Scott Hecker.

On Thursday we had to move out of the big house and the remaining team from there all moved to the smaller house – all emptied and cleaned well before our deadline, then off to Mispillion to catch some of those elusive last Knot. After some discussion of where to set the net, we put it on the flat area. The birds came up and worked into the area and after jiggling and twinkling we made a catch including 27 Red Knot ranging from 95 g to 216 g, 29 Ruddy Turnstone which weighed up to 180 g and more White-rumped Sandpipers than we have caught in total before. The other highlights have to be two second year Red Knot (which we catch very few of and so adding colour marks could tell us a lot about their movements) and a Knot carrying a geolocator which was deployed in 2011 so should have two southbound migrations stored – fingers crossed.

Friday was the last full field day for the remaining members of the Wash team. So a day of knocking off a few sites, lots of people heading out, data checking and a catching attempt. Well actually it was a proof of concept of a new trap which was successful, but still needs some more work.

A great season, although very tiring – lots of early mornings, with lots of data collected and much fun had – only 11 months to the next Delaware shorebird season! 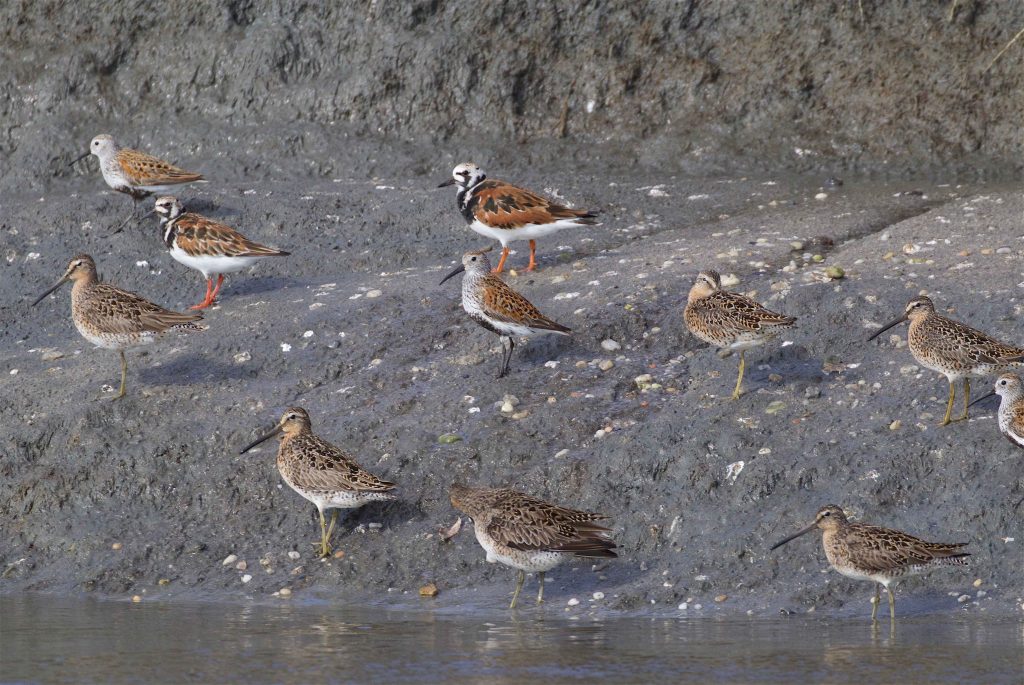 Some of the species that are the focus of research in Delaware Bay; Ruddy Turnstone, Dunlin and Short-billed Dowitcher. Photo by Scott Hecker.