As we only had two Turnstone in the catch on 24 May, we went for a small catch on 25 May on Prime Hook Beach, hoping to repeat the 22 May catch. We found Turnstone in the same place, but they were moving around a lot so we only managed a very small catch. Others spent the day out resighting and surveying.

Saturday saw the second aerial/ground count – apparently there were 34,500 Knot in the Bay on the first one – the highest number for many years. Most of the birds on the Delaware shore were in Mispillion as the beaches were very busy as it is a holiday Monday weekend. We got most of the sites surveyed while doing the ground-truthing of the aerial count and then headed out for an excellent BBQ with old friends. 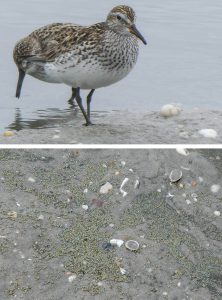 There are lots of White-rumped Sandpipers around this year…and plenty of Horseshoe Crab eggs for them to feed on. Photo by Cathy Ryden

With the holiday weekend, we decided to go out for an early morning catch on the Sunday, with alarms going off at 0545 hrs (not as bad as on the Wash sometimes, but we have now been going out early and working long hours for two weeks). We then sat and had a coffee as it was raining! Checking the weather we worked out we had a three-hour gap in the rain coming up and headed out to set.

With rain threatened, we decided to process the birds at the Nature Center, where there were some big gazebos up from a recent event there and where we could put the keeping cages under the building – it’s on stilts. A set team went out in the small boat, followed by a catching team in the large boat and a third team went to get set up ready for processing. Birds came into the area very quickly, but there were too many to catch so we waited for the tide to drop off and the birds to thin out – then took a catch, which was quickly extracted and transferred to the waiting keeping cages.

An excellent mixed catch with good samples of several species and an opportunity to interact with members of the public who came by and were fascinated by what we were doing. Of course, as we had the gazebos to work under the rain held off for us! However, we were sharing the shore with a lot of ‘no see-ums’ (midges) on this catch, so between taking and reading out measurements, there were slaps and exclamations as people were bitten – but we were also listening to beautiful song from the Dunlin, which are about ready to head off up north. Knot weights were from under 100 g to over 200 g, with many around 170-180 g – right on track to leave soon. The fattest Sanderling was more than twice as heavy as the lightest and was also heavier than the lightest Knot. The low-weight, late arrivals will have to put on weight rapidly to get up to their departure rates. Once the birds had been processed, another team went out on the boat to resight, followed by another boat crew later, who timed their return perfectly, docking as the rain started – more thunderstorms all evening.

After all that, Monday was a quieter day with boats into Mispillion and some other resighting going on, but also a lot of data inputting and checking.

Resighting on the beach, by Cathy Ryden