So the weather in Delaware has continued to be unseasonably wet; although not always as wet as the forecast suggested, we have been woken in the night by the rain at times. We had the same catching plan for three days, with the heavy rain and wind meaning that we couldn’t get out on the first two days – saves writing new plans on our wipe board each day and also means we get more data input and checked. We did get out in the afternoon on Saturday to try to make a catch of Sanderling for a PhD project – we found Sanderling on the north end of Prime Hook Beach and went to set. We had issues with Grackles and Blackbirds scaring the shorebirds but managed to get a small catch, but only two Sanderling.

At the end of the week it finally stopped raining and we were able to head out to Mispillion Harbor to make a catch following the plan we had had to abort for the last two days. As we got to the beach we realised something had changed – nearly all the gulls have headed off to their breeding colonies, so we could hear the noise of the shorebirds without the gull noise overlying it. We set on Back Beach, but couldn’t get sufficient birds catchable, so moved the net and, when that didn’t work, went to set the other net on a different beach but, before it was set, were able to catch on the first beach.

Moving the net, by Scott Hecker

There were some very good weights for this time of year, with a Red Knot over 190 g and almost a third of the Red Knot over 150 g. Also, an unprecedented percentage of juvenile Dunlin, which has us doubting our ability to age them until the processing teams conferred and found we both had a high percentage.

Unfortunately we didn’t get a Turnstone sample to check their weights, so we looked for an option for later in the week and found we had many Turnstones (and few birds of other species) on Prime Hook Beach, not far from the main house and right by a public access point. We made a catch of over 80 Turnstone which gave us an excellent weight sample – and Turnstone are also doing well. The aerial count due for the afternoon was cancelled due to thunderstorms – it’s still not stopped raining and, as well as the Black-bellied Plovers we usually see on the fields, there are now also Semipalmated Sandpipers, Dunlin and Ruddy Turnstone on the edge of the pools that have formed. The Black-bellied Plovers on the fields have been well-checked for American Golden Plovers, but no luck so far. 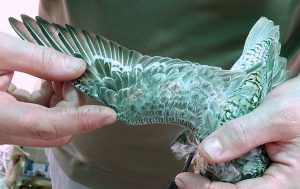 The aerial survey happened on Wednesday and we had people out on all our beaches to do ground counts for the hour before the plane arrived, with a quick count when we saw it coming. We are looking forward to hearing the results. On Wednesday we also got out resighting again and found that there were some light-looking Red Knot on the beach, which probably came in the night before – most looked pretty fat, though.

The next day we went out for another catch to check weights again. This time back in Mispillion Harbor to try and get a mixed catch. The first place we set the net didn’t work well as the study species did not run up into the area, a quick reset got us a big catch and a very good Red Knot sample but with only two Turnstone and no Sanderling. Some of the Knot were over 200 g already, but there were also a few under 100 g that had clearly just arrived. There are Horseshoe Crab eggs everywhere and the birds are doing really well. We are seeing lots of Semipalmated Sandpipers on the beach, which may be because there is so much water in the impoundments, but there are far fewer Short-billed Dowitchers now and the Dunlin are starting to sing. 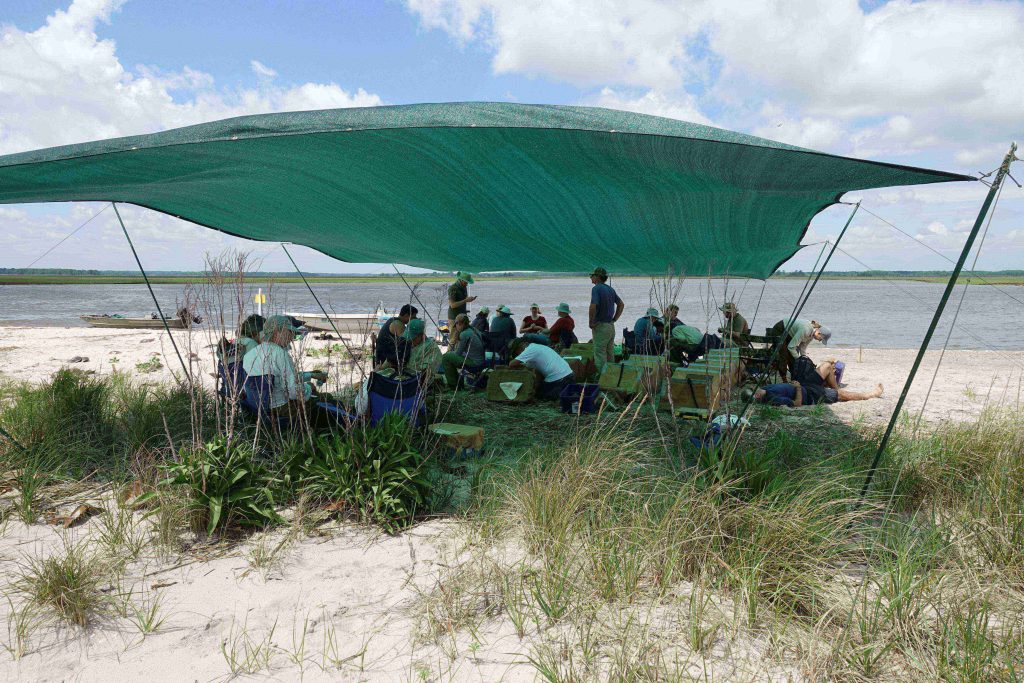 Processing the birds in the shade, by Scott Hecker